Join/Where with LINQ and Lambda

I'm having trouble with a query written in LINQ and Lambda. So far, I'm getting a lot of errors here's my code:

I'm new to using LINQ, so I'm not sure if this query is correct.

I find that if you're familiar with SQL syntax, using the LINQ query syntax is much clearer, more natural, and makes it easier to spot errors:

If you're really stuck on using lambdas though, your syntax is quite a bit off. Here's the same query, using the LINQ extension methods:

You could go two ways with this. Using LINQPad (invaluable if you're new to LINQ) and a dummy database, I built the following queries:

In this particular case, I think the LINQ syntax is cleaner (I change between the two depending upon which is easiest to read).

The thing I'd like to point out though is that if you have appropriate foreign keys in your database, (between post and post_meta) then you probably don't need an explicit join unless you're trying to load a large number of records. Your example seems to indicate that you are trying to load a single post and it's meta data. Assuming that there are many post_meta records for each post, then you could do the following:

If you want to avoid the n+1 problem, then you can explicitly tell LINQ to SQL to load all of the related items in one go (although this may be an advanced topic for when you're more familiar with L2S). The example below says "when you load a Post, also load all of its records associated with it via the foreign key represented by the 'Post_metas' property":

It is possible to make many LoadWith calls on a single set of DataLoadOptions for the same type, or many different types. If you do this lots though, you might just want to consider caching.

Daniel has a good explanation of the syntax relationships, but I put this document together for my team in order to make it a little simpler for them to understand. Hope this helps someone 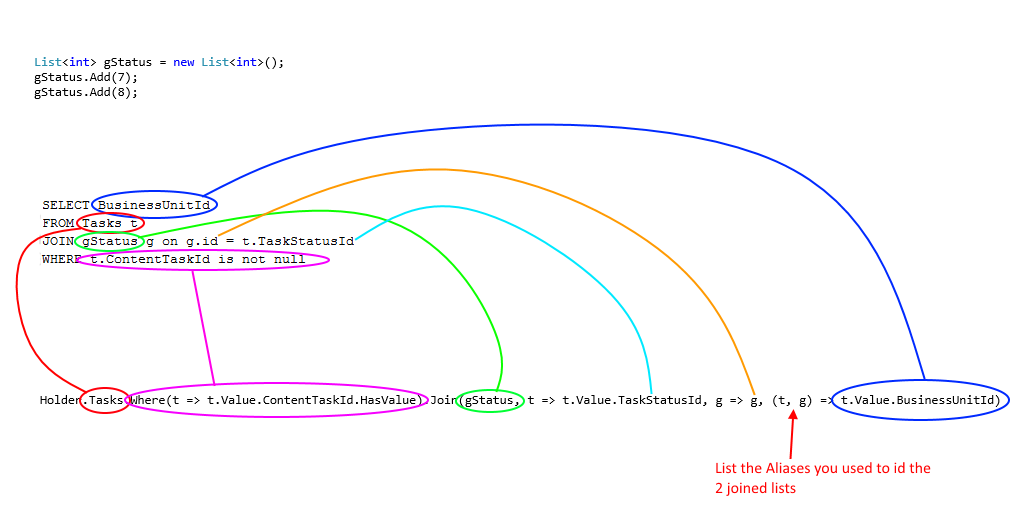 Your key selectors are incorrect. They should take an object of the type of the table in question and return the key to use in the join. I think you mean this:

You can apply the where clause afterwards, not as part of the key selector.

Posting because when I started LINQ + EntityFramework, I stared at these examples for a day.

If you're doing code first, you'd set up the property thusly: