git error: failed to push some refs to remote

For some reason, I can't push now, whereas I could do it yesterday. Maybe I messed up with configs or something.

This is what happens:

When I use the git push origin master 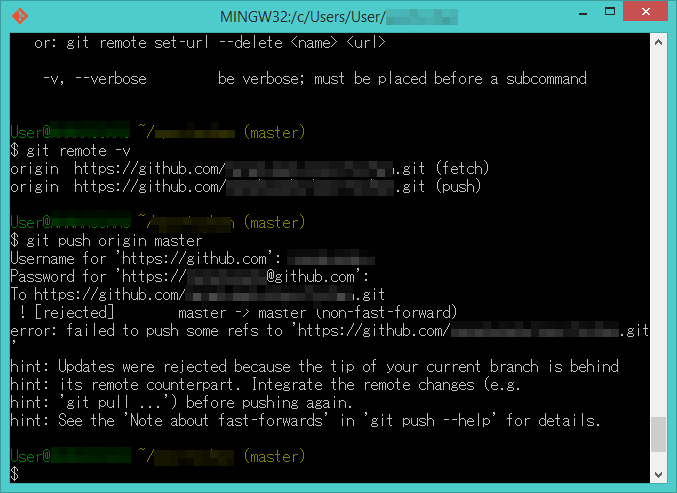 What my working directory and remote repository looks like:

If the GitHub repo has seen new commits pushed to it, while you were working locally, I would advise using:

The full syntax is:

A simple git pull would be enough.
(Note: with Git 2.27 Q2 2020, a merge.autostash is also available for your regular pull, without rebase)

That way, you would replay (the --rebase part) your local commits on top of the newly updated origin/master (or origin/yourBranch: git pull origin yourBranch).

See a more complete example in the chapter 6 Pull with rebase of the Git Pocket Book.

I would recommend a:

That would establish a tracking relationship between your local master branch and its upstream branch.
After that, any future push for that branch can be done with a simple:

See "Why do I need to explicitly push a new branch?".

Since the OP already reset and redone its commit on top of origin/master:

There is no need to pull --rebase.

That should solve the problem.

EDIT: Based on @Mehdi ‘s comment below I need to clarify something about —force pushing. The git command above works safely only for the first commit. If there were already commits, pull requests or branches in previous, this resets all of it and set it from zero. If so, please refer @VonC ‘s detailed answer for better solution.

If you just used git init and have added your files with git add . or something similar and have added your remote branch it might be that you just haven't committed (git commit -m 'commit message') anything locally to push to the remote... I just had this error and that was my issue.

I had same problem. I was getting this problem because i had not made any commit not even initial commit and still i was trying to push.

Once i did git commit -m "your msg" and then everything worked fine.

Rename your branch and then push, e.g.:

This worked for me.

I find the solution to this problem in github help.

You can see it from:Dealing with non-fast-forward errors

You can fix this by fetching and merging the changes made on the remote branch with the changes that you have made locally:

Or, you can simply use git pull to perform both commands at once: