I have read articles about the differences between SOAP and REST as a web service communication protocol, but I think that the biggest advantages for REST over SOAP are:

So, am I correct in these points?

Unfortunately, there are a lot of misinformation and misconceptions around REST. Not only your question and the answer by @cmd reflect those, but most of the questions and answers related to the subject on Stack Overflow.

SOAP and REST can't be compared directly, since the first is a protocol (or at least tries to be) and the second is an architectural style. This is probably one of the sources of confusion around it, since people tend to call REST any HTTP API that isn't SOAP.

Pushing things a little and trying to establish a comparison, the main difference between SOAP and REST is the degree of coupling between client and server implementations. A SOAP client works like a custom desktop application, tightly coupled to the server. There's a rigid contract between client and server, and everything is expected to break if either side changes anything. You need constant updates following any change, but it's easier to ascertain if the contract is being followed.

A REST client is more like a browser. It's a generic client that knows how to use a protocol and standardized methods, and an application has to fit inside that. You don't violate the protocol standards by creating extra methods, you leverage on the standard methods and create the actions with them on your media type. If done right, there's less coupling, and changes can be dealt with more gracefully. A client is supposed to enter a REST service with zero knowledge of the API, except for the entry point and the media type. In SOAP, the client needs previous knowledge on everything it will be using, or it won't even begin the interaction. Additionally, a REST client can be extended by code-on-demand supplied by the server itself, the classical example being JavaScript code used to drive the interaction with another service on the client-side.

I think these are the crucial points to understand what REST is about, and how it differs from SOAP:

This last point can't be emphasized enough. If your clients are building URIs from templates in documentation and not getting links in the resource representations, that's not REST. Roy Fielding, the author of REST, made it clear on this blog post: REST APIs must be hypertext-driven.

With the above in mind, you'll realize that while REST might not be restricted to XML, to do it correctly with any other format you'll have to design and standardize some format for your links. Hyperlinks are standard in XML, but not in JSON. There are draft standards for JSON, like HAL.

Finally, REST isn't for everyone, and a proof of that is how most people solve their problems very well with the HTTP APIs they mistakenly called REST and never venture beyond that. REST is hard to do sometimes, especially in the beginning, but it pays over time with easier evolution on the server side, and client's resilience to changes. If you need something done quickly and easily, don't bother about getting REST right. It's probably not what you're looking for. If you need something that will have to stay online for years or even decades, then REST is for you.

REST vs SOAP is not the right question to ask.

REST, unlike SOAP is not a protocol.

REST is an architectural style and a design for network-based software architectures.

REST concepts are referred to as resources. A representation of a resource must be stateless. It is represented via some media type. Some examples of media types include XML, JSON, and RDF. Resources are manipulated by components. Components request and manipulate resources via a standard uniform interface. In the case of HTTP, this interface consists of standard HTTP ops e.g. GET, PUT, POST, DELETE.

@Abdulaziz's question does illuminate the fact that REST and HTTP are often used in tandem. This is primarily due to the simplicity of HTTP and its very natural mapping to RESTful principles.

Client-server architectures have a very distinct separation of concerns. All applications built in the RESTful style must also be client-server in principle.

Each client request to the server requires that its state be fully represented. The server must be able to completely understand the client request without using any server context or server session state. It follows that all state must be kept on the client.

All components must interact through a single uniform interface. Because all component interaction occurs via this interface, interaction with different services is very simple. The interface is the same! This also means that implementation changes can be made in isolation. Such changes, will not affect fundamental component interaction because the uniform interface is always unchanged. One disadvantage is that you are stuck with the interface. If an optimization could be provided to a specific service by changing the interface, you are out of luck as REST prohibits this. On the bright side, however, REST is optimized for the web, hence incredible popularity of REST over HTTP!

See this blog post on REST Design Principles for more details on REST and the above stated bullets.

SOAP (Simple Object Access Protocol) and REST (Representation State Transfer) both are beautiful in their way. So I am not comparing them. Instead, I am trying to depict the picture, when I preferred to use REST and when SOAP.

When data is sent over the Internet, each unit transmitted includes both header information and the actual data being sent. The header identifies the source and destination of the packet, while the actual data is referred to as the payload. In general, the payload is the data that is carried on behalf of an application and the data received by the destination system.

Now, for example, I have to send a Telegram and we all know that the cost of the telegram will depend on some words.

So tell me among below mentioned these two messages, which one is cheaper to send?

I know your answer will be the second one although both representing the same message second one is cheaper regarding cost.

So I am trying to say that, sending data over the network in JSON format is cheaper than sending it in XML format regarding payload.

Here is the first benefit or advantages of REST over SOAP. SOAP only support XML, but REST supports different format like text, JSON, XML, etc. And we already know, if we use Json then definitely we will be in better place regarding payload.

Now, SOAP supports the only XML, but it also has its advantages.

SOAP relies on XML in three ways Envelope – that defines what is in the message and how to process it.

A set of encoding rules for data types, and finally the layout of the procedure calls and responses gathered.

This envelope is sent via a transport (HTTP/HTTPS), and an RPC (Remote Procedure Call) is executed, and the envelope is returned with information in an XML formatted document.

The important point is that one of the advantages of SOAP is the use of the “generic” transport but REST uses HTTP/HTTPS. SOAP can use almost any transport to send the request but REST cannot. So here we got an advantage of using SOAP.

As I already mentioned in above paragraph “REST uses HTTP/HTTPS”, so go a bit deeper on these words.

When we are talking about REST over HTTP, all security measures applied HTTP are inherited, and this is known as transport level security and it secures messages only while it is inside the wire but once you delivered it on the other side you don’t know how many stages it will have to go through before reaching the real point where the data will be processed. And of course, all those stages could use something different than HTTP.So Rest is not safer completely, right?

But SOAP supports SSL just like REST additionally it also supports WS-Security which adds some enterprise security features. WS-Security offers protection from the creation of the message to it’s consumption. So for transport level security whatever loophole we found that can be prevented using WS-Security.

Apart from that, as REST is limited by it's HTTP protocol so it’s transaction support is neither ACID compliant nor can provide two-phase commit across distributed transnational resources.

I am not drawing any conclusion, but I will prefer SOAP-based web service while security, transaction, etc. are the main concerns.

Here is the "The Java EE 6 Tutorial" where they have said A RESTful design may be appropriate when the following conditions are met. Have a look.

Hope you enjoyed reading my answer.

REST(REpresentational State Transfer)
REpresentational State of an Object is Transferred is REST i.e. we don't send Object, we send state of Object. REST is an architectural style. It doesn’t define so many standards like SOAP. REST is for exposing Public APIs(i.e. Facebook API, Google Maps API) over the internet to handle CRUD operations on data. REST is focused on accessing named resources through a single consistent interface.

SOAP(Simple Object Access Protocol)
SOAP brings its own protocol and focuses on exposing pieces of application logic (not data) as services. SOAP exposes operations. SOAP is focused on accessing named operations, each operation implement some business logic. Though SOAP is commonly referred to as web services this is misnomer. SOAP has a very little if anything to do with the Web. REST provides true Web services based on URIs and HTTP. 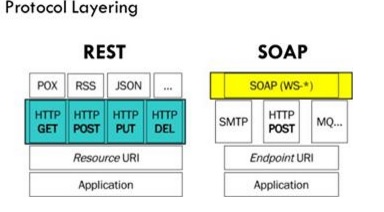 Difference between Rest and Soap

IMHO you can't compare SOAP and REST where those are two different things.

SOAP is a protocol and REST is a software architectural pattern. There is a lot of misconception in the internet for SOAP vs REST.

SOAP defines XML based message format that web service-enabled applications use to communicate each other over the internet. In order to do that the applications need prior knowledge of the message contract, datatypes, etc..

REST represents the state(as resources) of a server from an URL.It is stateless and clients should not have prior knowledge to interact with server beyond the understanding of hypermedia.