How do I tell Gradle to use specific JDK version?

I can't figure out to get this working.

I thought about having the gradle.properties file, defining the variable. Something like

What I don't want

I could live with many suggestions:

I have more than one JDK7 available and need to point to a special version (minimum JDK_u version).

Any answer is appreciated and I'm thankful for every hint to the right direction.

If you add JDK_PATH in gradle.properties your build become dependent on on that particular path. Instead Run gradle task with following command line parametemer

This way your build is not dependent on some concrete path.

To people ending up here when searching for the Gradle equivalent of the Maven property maven.compiler.source (or <source>1.8</source>):

In build.gradle you can achieve this with

See the Gradle documentation on this.

If you are executing using gradle wrapper, you can run the command with JDK path like following

If you are using linux and gradle wrapper you can use following solution.

Add to your gradlew script file:

In this solution, each developer can set his own JDK path. File local.properties shouldn't be included in version control system.

There is one more option to follow. In your gradle tasks, you can set your desired jdk path. (I know this is a while since the question was posted. This answer can help someone.)

Right click on the deploy or any other task and select "Open Gradle Run Configuration..." 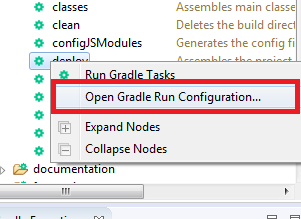 Then navigate to "Java Home" and paste your desired java path.

Please note that, bin will be added by the gradle task itself. So don't add the "bin" to the path.